Nothing beats July 4th in the Midwest. Lake DeNeveu, 2014.

Our favorite place to celebrate Independence Day is in Wisconsin. The weather is perfect, the beer is cold, and the family and friends are in abundance. We’ve been spoiled spending many a July 4th at the lake where I grew up vacationing with family.

This year, we celebrated in the second best place ….

We joyfully welcomed bebe #2 in the early morning hours of July 3. A little firecracker from conception … it’s just fitting his arrival landed the celebratory weekend! Hard to believe he’s already a month old and we can’t imagine life without him. Meet Micah James: 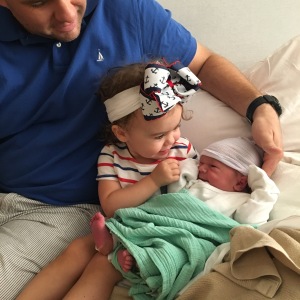 Big sis | already so much in love

Micah was late and his delivery was fairly quick, just like his big sister. My labor started in the afternoon with contractions that quickly progressed. We were admitted into the hospital at 10:30 p.m. and that epidural couldn’t come fast enough!

Special shout-out to our OBGYN team. Not only did the same doctor deliver both our babies (unheard of in our practice), but, once he was multiple days late, they also worked with us to make sure we had a holiday-weekend delivery, which is exactly what we wanted.

I did manage a CrossFit workout on Saturday, July 2 at Chuckwalla CrossFit. It was a good one with lots of jumping, running, and lifting. I think Coach John’s programming did the trick – THANKS JOHN!

And, don’t hate me for saying this, but my recovery has been simple. I’ve been up and about … doing my mom/consultant thing. And last week, I started some at-home conditioning; nothing crazy, even simple push-ups are making me sore.

We’re so thankful to the CrossFit communities of CrossFit Full Strength and Chuckwalla CrossFit in Phoenix. While I was nowhere near as dedicated or setting PRs like I did the first go-around, it felt amazing to lift some weights when I could.

Coach Luz coaching me through one of the CrossFit Open WODs at Full Strength. March, 2016.

As I’ve recently written, working out at Full Strength with Coach Luz, a two-time Olympic contender, has been inspiring and educating. I’ve been able to focus on improving the mechanics of my lifts – especially the snatch (which I was never comfortable with prior to pregnancies!) – instead of focusing on setting PRs. While setting PRs can give you a natural high, there’s also so much to be said for working through the details of complicated lifts and the feeling of success that comes with nailing it. 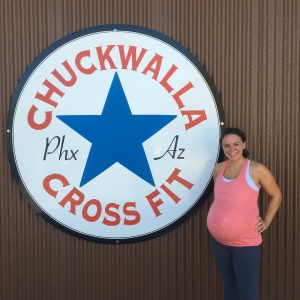 Coach John Hazdovac is the best … even if his WOD didn’t get my water to break during the WOD! ha!

This girl loves to test herself.

The few Saturdays before our delivery, we spent at Chuckwalla as a family. Chad and I worked out and FG played in the supervised kiddo area. It was awesome to do that together. We’re so appreciative to the Hazdovac family for making it work for us!!!

So, not our typical July 4th and subsequent weeks, but full of fireworks all the same. Welcome to the team, Micah. We love you so much already!

Both babies at one month.

Five weeks off from CrossFit is five weeks too long. Finally made it back to CrossFit Full Strength this week {despite being told the ligaments in my foot needed at least 12 weeks}. I’m not running or jumping to reduce impact; it did feel really good to have a bar between my hands again.

CFFS added weightlifting classes to its early-morning line-up on Tuesdays and Thursdays with Coach Luz. As I’ve mentioned before, Coach Luz is a multi-attendee at the Olympics for weightlifting, so any opportunity to learn and train with her is only time well-spent.

She’s done a really good job of pushing my comfort with doing snatches. For whatever reason in my 3+ years of CrossFit, this lift was never really an emphasis {and one I flat out avoided when I was pregnant with FG}. Even after such a short time under Luz’s guidance, the lift hold and movements are becoming second nature. Now it’s time to start increasing my weight! 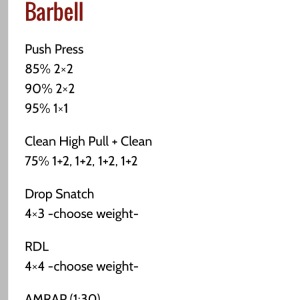 Thursday was a lot!

So I cruise right from a cough + bruised ribs, to spraining both my ankles/feet.

Just before I fell, enjoying the park in our St. Patrick’s Day attire.

Oh you know, stepping off a playground being the paparazzi momma. So typical. I missed The CrossFit Games 16.4, but luckily I did get in two CrossFit Full Strength WODs last week.

Happy St. Paddy’s + Happy Birthday to me. Was an amazing day, despite my feet!

My left foot, two days after my fall.

This week, my left foot is still very painful, so I’ve been taking the dog on very short and leashless walks and doing the daily 21-Day Fix routines. Still working up a sweat and lifting weights, but not further straining myself.

Here’s hoping next week is more successful {and HEALTHY!}.

Any thoughts on the final CrossFit Games Open WOD? Looking forward to seeing the champs throw down in 16.5 tomorrow night!

Lots of {much needed} focus on the core. Many of the movements are great for pregnancy. Twice this week we did tabata sit-ups and planks. And Thursday, during the strength training between sets, we did oblique side bends with plates. Really feeling it all!

CFFS has placed a lot of emphasis on the power and full snatch during this challenge. This is honestly a lift that I wasn’t comfortable with prior to this challenge. I’m gaining confidence and ease every time we work on it. It’s pretty exciting considering I’ve been an on-again / off-again CrossFitter for 4+ years. That’s something I love about CrossFit, it’s an opportunity to constantly learn and improve. The sky is really the limit.

I’ve also refined my rowing ability. I was explosive out of the gate and would easily wear myself out. Coach Emily took a few minutes a few weeks and taught me how to slow down to actually gain more power and speed. It worked! Every day, we start with a 400m row and I can see and feel the difference of slowing down to gain power.

Monday: ran another two miles with my Frankie boy. Great way to get some extra vitamin d and exhaust our pooch!

Tuti was my workout buddy this week!

Tuti is one of many mascot dogs at CrossFit Full Strength. Love that the community includes four-legged friends, too! #WODDogs are the best. 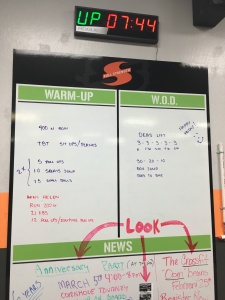 Athlete profile updates: I’m in a holding pattern, waiting on news of baby arrivals + people filling out the questionnaire. If you or someone you know is interested in being profiled, please contact me. I would love to feature some more #crossfitandpregnant mommas!

It was a good week of workouts and weather in Phoenix! We spent a lot of time outdoors, enjoying the 80+ degree weather.

This handsome, furry fella and I managed a two mile run to kick off the week. I haven’t hit the pavement for a run since October and it felt great! Frankie was in heaven. Really, anytime he gets some solo time with Chad or me, he’s in heaven. He’ll always be the first “born!”

Thursday, the hubs had an early morning and I couldn’t stand to wake this hamball to make the Thursday CFFS Challenge WOD. I had every intention to make the evening session and then LIFE. So glad I got that run in earlier in the week!

I was solo in the Friday morning class – as in no other ladies showed up – boo! Selfishly, it was nice to have some very personal attention from CrossFit Full Strength’s Olympic Weightlifting pro {She’s been the the Olympics three times!}. Can you say, badass?! 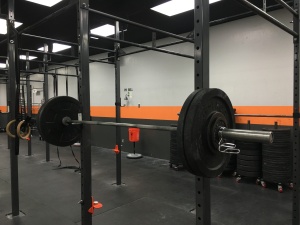 All you need is love … and CrossFit.

I officially registered for the 2016 CrossFit Games Open and got this cool badge to prove it. I’m wanting to make a comeback in my CrossFit journey … and hoping I survive.

Registration is $20. You can sign up with an affiliate or video yourself doing the WODs at home. And there are all levels of performance: Teen, Master, Veteran, Rookie, Military, Six-in-Row (aka badass!), SCALED, First Responder.

The Open is a fun time to see where you stack up. Yes, you can absolutely get crazy competitive and shoot for Regionals. But the vast majority of us sign up for the camaraderie, the commitment, the fun. Looking forward to pushing myself on the competition floor with my fellow CrossFit Full Strength friends starting February 25.

After a long break from CrossFit {and blogging!}, I reentered the box last week. While I’m struggling to sit down after three intense days, I’m thrilled to be back.

While I wasn’t CrossFitting, I did manage to get back to my happy weight. It took 16 months and I finally managed to shed that weight thanks to the 21-Fix program. The combination of at-home workouts (that were actually breath-taking) with the easy-to-follow nutrition guidelines were exactly what I needed to get my body back. {I didn’t do the shakes – just portion control and the 30-minute WODs.} It was also nice to do something different and that fit into my schedule.

But I did miss CrossFit!

To get back to CrossFit, I recently signed up for CrossFit Full Strength‘s all-women six week challenge. CrossFit Full Strength is one of the oldest affiliates in Phoenix and it recently expanded into a new space. Everyone I’ve met is friendly, approachable and supportive. And the coaches are killer; they have a combined 30+ certs. Exactly what you should expect when joining a CrossFit affiliate!

The six week challenge is a collection of women at ALL fitness levels and includes an information-packed paleo challenge. Four time Regional competitor and owner of CrossFit Full Strength Gayle Shalloo-Davenport understands that many women don’t love working out with men – especially in such a perceived competitive environment. She’s found the groups provide the perfect foundation for CrossFit. The box also offers all-men challenges, too. 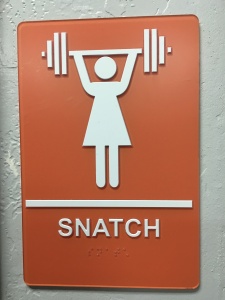 On another note, I have a number of athlete profiles in the pipeline. Stay tuned! Thanks again for your continued following and sharing.