Meet Andrea Signor. Andrea is a recovering journalist, momma of two, Olympic weightlifter and founder of mamalifts.com. Andrea reached out to me as she was launching mamalifts. Like me when I first started out, I found there was very little research, which led me to documenting my own experiences. Andrea’s doing the same – primarily centered around Olympic lifting, but she did CrossFit for two years before she focused.

That focus is paying off – she competed in her first Oly competition just FOUR months after delivering baby #2. Talk about inspiring! Andrea’s always been active and loves to be outdoors. Living in Colorado makes it easy to rock climb, snowboard, and hike. And Andrea takes advantage, like most Coloradans.

A proud member of CrossFit Castle Rock Barbell Club, Andrea finds she’s feeling better than she did after her first mostly due to her tribe at the barbell club and lifting with other women — some of whom have had kids and some who haven’t. “Working out at the gym is “me” time and it’s nice to have a few hours a week where it’s just about me feeling good and not having to worry about anything else.”

Also doesn’t hurt that her husband also has her back. He is more enlightened than most and realizes not all women are created equal – so to tell all not to lift more than 10 pounds – is actually silly.

We agree. More from Andrea:

A funnier anecdote: When I told my (male) lifting coach that I was pregnant with my first child, he told me that I should continue lifting and not use my pregnancy as an excuse to not exercise. I believe his exact quote was, “Do you think when Running Deer got knocked up the tribe stopped migrating with the buffalo? No. So you shouldn’t stop training.”

My goal in CrossFitting while pregnant is: My goal was always to maintain strength and stay as healthy as possible. One thing I struggled with in both pregnancies was knowing the line between pushing myself and overdoing it. I think more often than not I went too easy, but I was working out by myself at a rec center and didn’t have a program or a support system to help guide my workouts. (My former coach was in Michigan and we had moved to Colorado during my first pregnancy).

What exercise advice did your doctor provide you? Did you follow it? Ugh. The nurses at my doctor’s office advised me to not lift more than 10 pounds and when I said I was lifting regularly they told me I could lift 25 pounds. To be honest, I just politely nodded and didn’t disclose what I was doing for workouts.

CrossFit and pregnant, where do you find inspiration? I love hearing other women’s stories of working out through their pregnancies. I have a good friend who is currently pregnant with her second child and she’s a yoga instructor. I have another friend who just competed in a power-lifting competition at 14 weeks. I knew women who climbed until they were seven months pregnant. Becoming a parent is such a jarring experience and I think moms especially struggle with wanting to go back to feeling like their old selves and embracing this new role. I think staying active and passionate with a sport is key to helping bridge that divide.

Since doing CrossFit while pregnant, I’ve learned: Your body is capable of so much and when you’re working out and carrying a child you are so much more in tune with your body.

Biggest CrossFit and pregnant challenge I’ve faced: Knowing when I should push more. I think I often played it safe and I probably sacrificed some strength as a result.

Do you follow a particular eating lifestyle? Not really. We cook 90% of our meals at home. We mostly eat meat and vegetables out of convenience; but I never denied myself if I wanted carbs or dessert — it just had to be homemade. So I totally ate cookies and brownies, but because it was kind of pain to bake everything from scratch, it wasn’t super often.

Best CrossFit and pregnant tip or secret you’ve discovered: I always loved feeling my babies go wild after my workouts. I think I lulled them to sleep while I worked out and about 30 minutes after I stopped they would just have a dance party. That was a cool feeling.

What have you found most valuable about CrossFit while pregnant?: It lets you retain a piece of  your old self when so much is changing and out of your control. 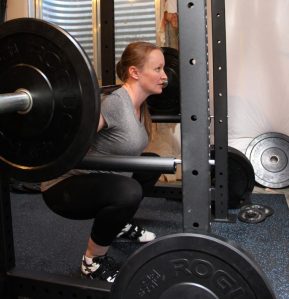 Modifications you’d like to share with others: Widen your squat stance as your belly grows to adjust for a shifting center of gravity

Lessons learned: There’s a huge community of CrossFitters and lifters who are going through similar experiences. Don’t be afraid to reach out to these groups for support or advice. I wish I would have done this instead of kind of existing in my own bubble for so long.

If you could do it all again, you would: Come up with a programming plan and adjust as necessary instead of “seeing how I feel” when I get to the gym.

Favorite quote: The days are long, but the years are short.

Favorite girl WOD: I don’t remember these, but my favorite lifts are squats and deadlifts – my bread and butter

How was your delivery? Both of my deliveries were textbook. My water broke at 37 weeks and 2 days (for both girls), I labored without drugs (I have scoliosis and wanted to avoid an epidural at all costs), and pushed for about 10 minutes and they were out. My first was born in Frisco, Colorado, at an elevation of 9,000+ feet and, despite being on the earlier side, she didn’t need oxygen (about 50% of babies who are born up there do).

Anything noteworthy your first six weeks? I was cleared to workout with my first two weeks after giving birth. I was cleared at six weeks with my second, although I began doing easy workouts (walking, Turkish get-ups, light squats) sooner. 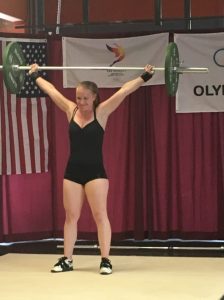 Are you back to working out? How’s it going? Yes! This recovery has been so much better than my first. I think a lot has to do with hormones, but I’m way more motivated to be at the gym this time around and I’m training for my first Olympic lifting competition, which will take place June 17 (at almost 5 months post-partum).

Any advice you want to share? Do not beat yourself up if the desire to return to the gym isn’t there. I phoned it in for months after my first was born and it wasn’t until I was done breastfeeding that my hormones leveled out and I felt a true desire to get back to it.

Thanks for sharing your story, Andrea! xoxo